Dennis Reinbold says he still aims to return Dreyer & Reinbold Racing to IndyCar full-time after the plan to expand its part-time presence this year was altered by the knock-on effects of the pandemic.

After six years of running the Indy 500 only, DRR-Chevrolet was able to add the three races on the Indianapolis Motor Speedway’s road course to its roster, but Reinbold’s plan to expand further was put on hold.

“No excuses: the reality of the universe is that people had to reshuffle some things,” said Reinbold, whose team last ran full-time in 2012, when Oriol Servia landed the team four top-five finishes, once DRR had switched from the underperforming Lotus engine to Chevrolet. “We took the time to restructure our program. We had to take a few steps back, reprioritize what’s important. That’s this place and this month.

“We are working to become a full time team in the series. The series is expanding and growing. It’s on fire; it’s doing great. But for now, for us, the best thing is to do the best we possibly can for this month of May and go from there.

“[A full-time return] is our goal, but it got postponed a bit.”

He later pointed out, “We do some rally car racing and other things. We’re not just scrambling around for one event a year. We do engineering things at our shop and a lot of different aspects that revolve around racing… After the Indy 500 we put a plan together for the next one – whether we do additional races or series or not. We try to improve year after year.

“The last couple years we haven’t represented ourselves the way we should [in the 500] but we feel good about our start. We feel good about where we’re positioned for the race weekend. Chevy power is amazing. The Chevy relationship, that we have had since the early 2000s, has been great. They’ve been great to work with.

“We really want to bring a victory not just for us, AES [sponsor] and 500 Festival committee, but also for Chevrolet and our other sponsors that are local.”

This year the #24 DRR-Chevy, driven by Sage Karam, is sponsored by the AES Corporation, an Arlington, VA-based electrical power supply company that since 2001 also had a base in Indiana, having acquired the Indianapolis Power & Light Company. The company previously sponsored the Indy 500 Festival and the Parade [canceled for this year] but this is the first the company has sponsored a car in the race itself.

Brandi Davis-Hanley, chief public relations officer, said: “Not having the parade leaves a hole. We feel thankful. Not just what this means but also for our community. It signifies the value. This is our first time seeing our name on a car at this race track. We’ve been a part for so long.

“The biggest attraction for us, working with Dreyer & Reinbold Racing… this is a full circle moment for me. I am born and raised in Indianapolis and worked at 500 Festival when Dennis was on the board. DRR has been a longtime partner of 500 Festival. I couldn’t imagine doing this with anyone outside DRR. This is our first time. We’re excited.”

Reinbold has run Karam in six of the last seven 500s, and for the previous three editions he paired him with JR Hildebrand. This year DRR has reverted to just one car – one of only three singleton entries without an affiliation with another team – but Karam doesn’t believe this is necessarily a disadvantage.

“There’s obviously some positives to having two cars, and some negatives,” said the 2013 Indy Lights champion. “When I first came to Dreyer we were one-car effort, it was my first 500, we got ninth. We were one for a while and ran really well. We went to two cars (in 2018) when the new chassis came out and kind of struggled.

“Two cars is good to have data points, but we’re a smaller team. There’s a lot going on. More people, a lot more things to look at, and as much as I think it can help, it can also hurt.

“Me and JR worked well together, but we’re polar opposites! JR is quiet, calculated and knows his stuff with numbers. Whereas I’m energetic, talkative, and tell the engineers how it is with how I feel. It was cool to talk to JR in that sense about what he thought more exact changes, where I was like ‘This is what I kind of feel’.

“The way I work with the engineer, he knows how my language is. I think it’s good being one-car again, effort and energy into one car… Our most successful runs here have been with one car.

“Small team here from Indy taking on the big teams like Andretti with 6 cars, Penske with 4, and what they have. They have the manpower, resources to do those things. They can run their test programs faster, but if we focus on what we need to, we can be in the hunt. A lot of people saw that we are quick.”

Reinbold expanded: “It’s very gratifying to come out and know that we’re in the game. It’s a difficult thing, year after year and condition after condition on a daily basis at this place. It’s the hardest race track in the world. You can’t take it for granted. You have to respect what’s going on out here.

“And the competition. The field is the deepest since I’ve been involved in racing, 20-plus years. We keep working on it and try to learn from our mistakes. The path remains the same, but there have been a lot of innovations along the way.

“The hybrid comes out soon [2023] and fits us well, with our objectives and AES, what they want to do for the future of power. That’s what I mean when I say IndyCar is on the cusp of expanding and growing and doing it the right way. We’re excited about our future. The direction is exactly where it needs to be.” 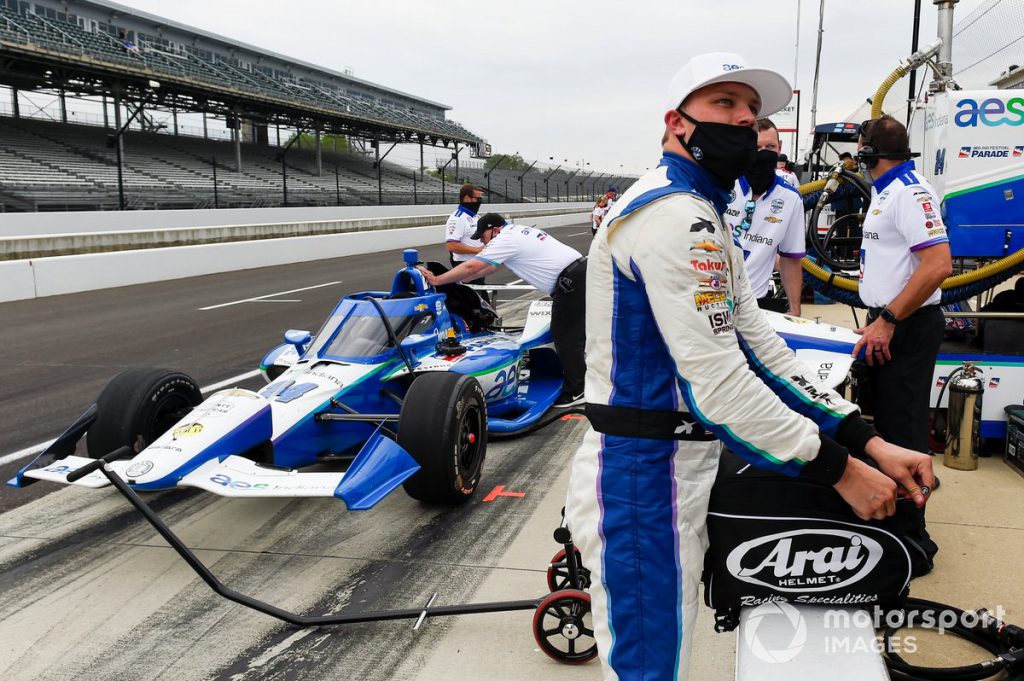