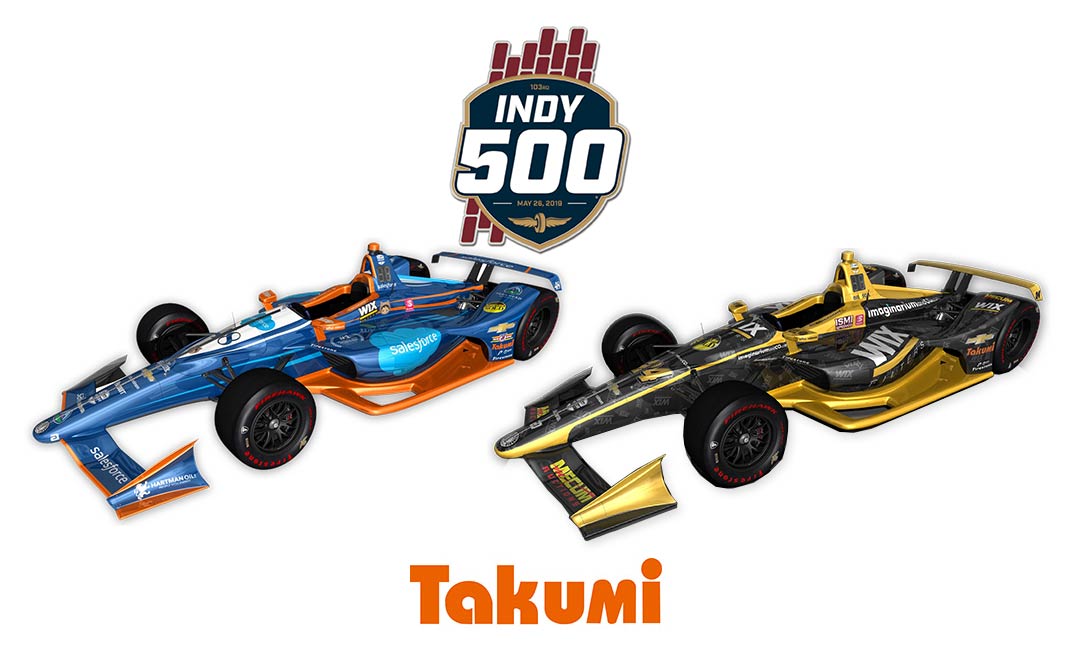 INDIANAPOLIS – Takumi USA, a manufacturer of CNC machines and a division of Hurco Companies, Inc., headquartered in Indianapolis, Ind., will have two cars in the Indianapolis 500, the largest single-day sporting event in the world, due to the company’s partnership with Indianapolis customer Dreyer and Reinbold Racing (DRR). The Takumi logo will appear on both the #24 DRR car driven by Sage Karam and the #48 DRR driven by J.R. Hildebrand.

“With both DRR and Takumi USA being headquartered here in Indianapolis where the history of racing is so engrained in the city’s culture, the partnership is advantageous for both of us. DRR uses the Takumi H10 3-axis CNC machine and the U600 5-axis CNC machine to make parts for their Indy cars, and we have the opportunity to give customers behind-the-scenes access to the world of IndyCar racing,” said Cory Miller, General Manager of Takumi USA, a division of Hurco Companies, Inc.

Takumi USA has a range of CNC machines that are designed and built to achieve higher productivity through speed, accuracy, reliability, and are equipped with the world’s leading control from FANUC®.

DRR has a rich heritage at the Indianapolis Motor Speedway. Dennis Reinbold’s grandfather, “Pop” Dreyer, built leading roadsters that raced at the Indianapolis Motor Speedway during the 30s, 40s, and 50s. The current team, owned by Dennis Reinbold and Robbie Buhl, formed in 2000 with Robbie Buhl behind the wheel. They won their debut race at the Walt Disney World Speedway in January of 2000.

In addition to the Indianapolis 500, Miller announced today that DRR and Takumi USA have partnered to run a car driven by Karam in four ARX2 Rallycross rounds this year starting at Mid-Ohio in June. Reinbold, whose team won the 2016 U.S. Rallycross Lites series championship, noted, “We were impressed with Sage’s performance in a test last year and we wanted to give him this opportunity now after the Indy 500. We are also exploring more possibilities for Sage to compete in the reminder of the 2019 ARX2 season.”

About Takumi USA
At Takumi, we have adapted the world’s leading control to our rugged, durable machines to achieve higher productivity through speed, accuracy, and reliability, resulting in double-column and C-frame machining centers that provide world-class performance for die/mold, aerospace, and other high speed applications.
We implement stringent processes to design and build rigid and reliable machining centers that exceed our customers’ expectations. From our meticulous manufacturing processes – such as hand scraping contact areas – to the use of premium components, we infuse quality into each CNC machine that results in outstanding speed, accuracy, and surface finishes
Founded in 1988, Takumi has been exceeding customers’ expectations in Europe and Asia for 30 years. When Takumi was acquired by Hurco Companies in 2015, a new Takumi Technology Center and Showroom was built in Indianapolis to serve the U.S. market and a comprehensive service and support network was established. Check out our product line of machining centers today, at TakumiUSA.com.

About Dreyer & Reinbold Racing
Dreyer & Reinbold Racing is entering its 20th season of competition in 2019, making it one of the longest-tenured teams in IndyCar Series competition. Current Co-Owners, Dennis Reinbold and Robbie Buhl, first teamed in full-time competition at the Walt Disney World Speedway in January of 2000. With Buhl behind the wheel, the two owners tasted victory in their debut race. The 2009 IndyCar Series season-opener, on the streets of St. Petersburg, marked Dreyer & Reinbold Racing’s 200th series start. In its history, the team has boasted a championship list of alumni drivers. Besides Buhl, the team has run Indianapolis 500 winners, Al Unser, Jr., Buddy Lazier, and Buddy Rice, along with IndyCar Series race winner, Ryan Briscoe. The team has one of the longest lines of heritage in American open-wheel racing and the Indianapolis 500 as Dennis Reinbold’s grandfather, “Pop” Dreyer, built leading roadsters that raced at the Indianapolis Motor Speedway during the 30s, 40s, and 50s.More information about the team can be found at www.dreyerreinboldracing.com

VISIT US AT EASTEC Video

Visit Us At Eastec